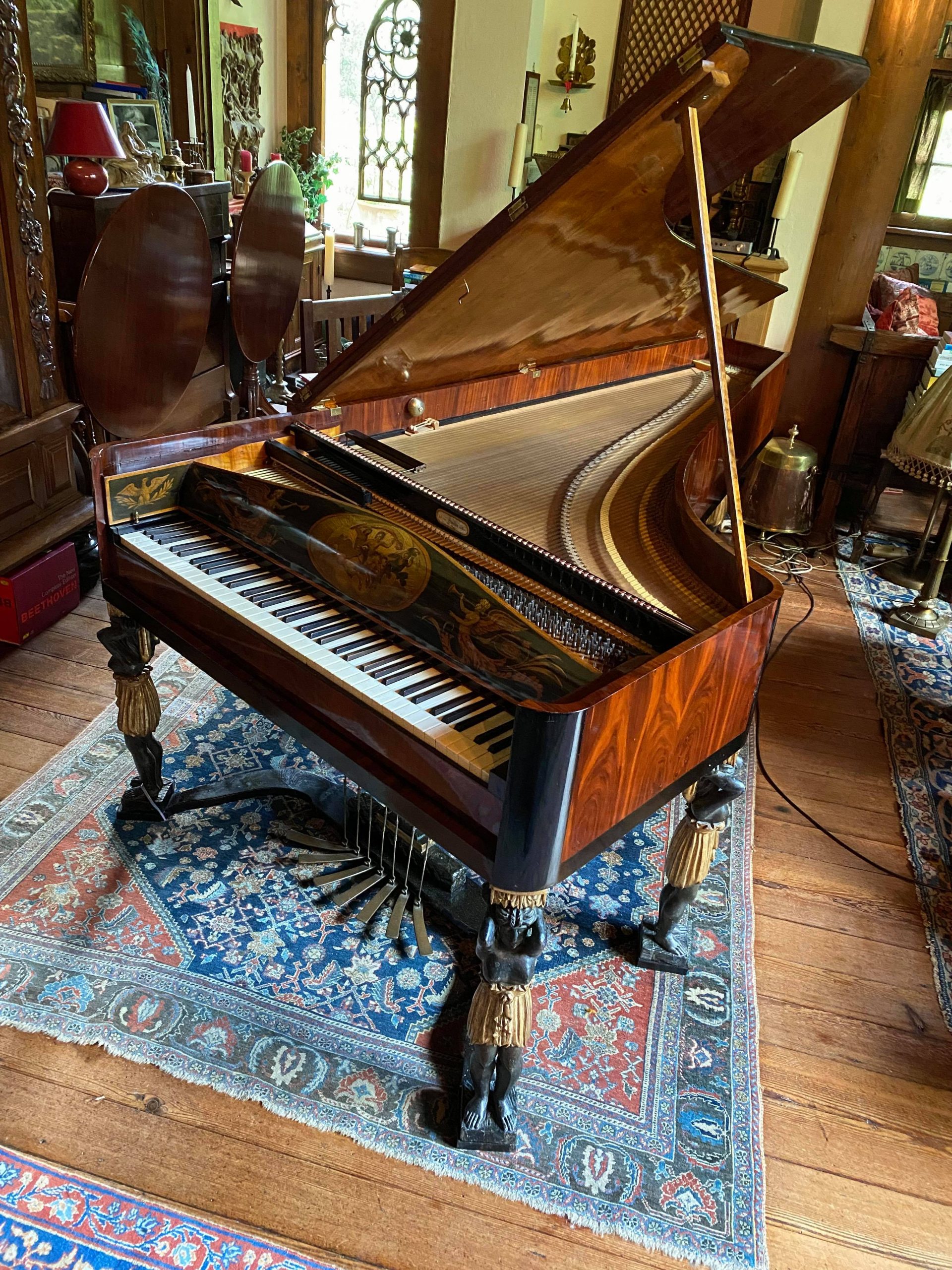 General description: Viennese action. Single bridge. An ornate lyre mounted on the front leg stretcher, the latter with seven pedals: una-corda, bassoon, dampers, double moderato, moderator and two combinations of Janissary effects.  Another similar piano can be found in the V&A in London. 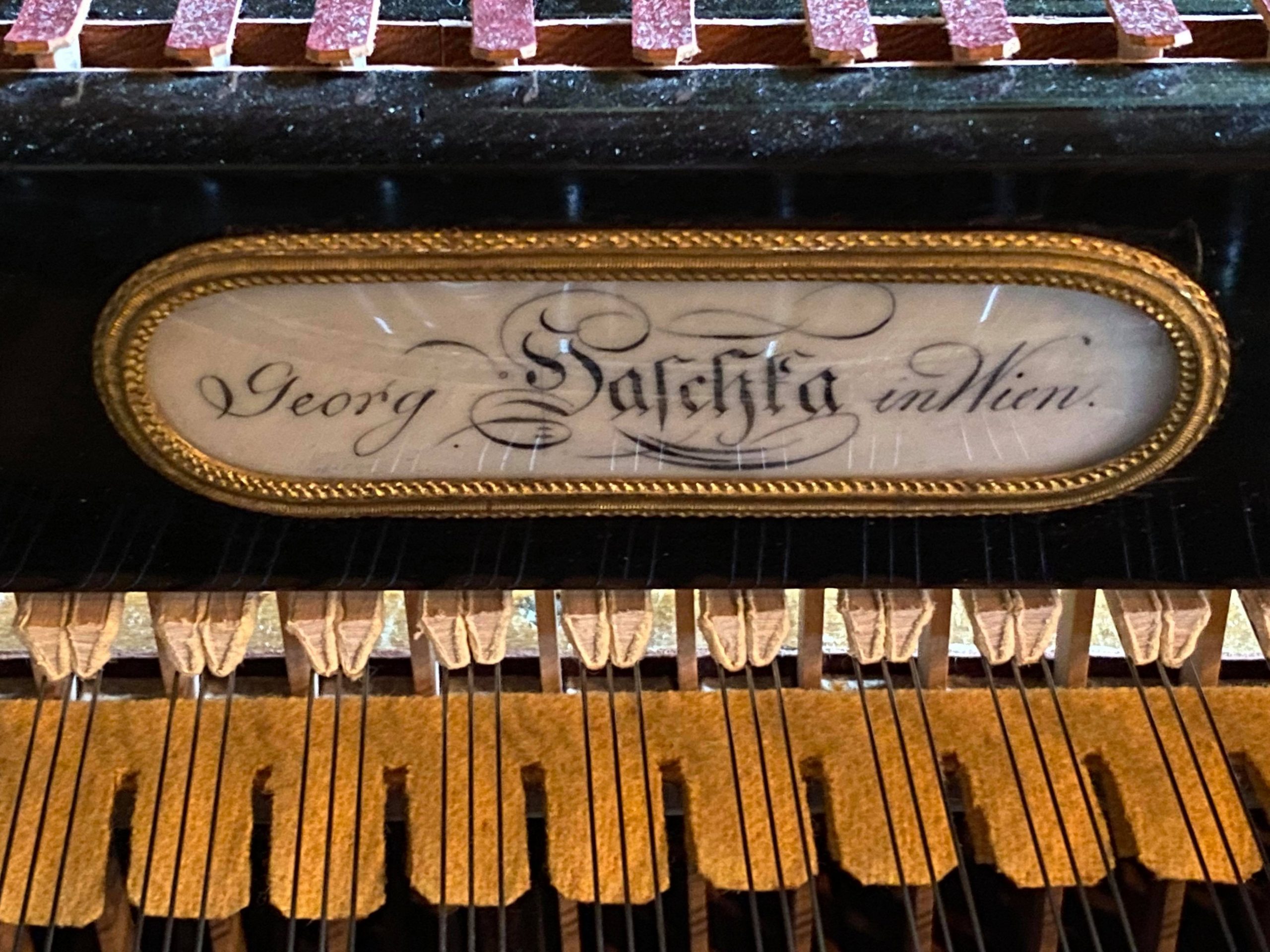 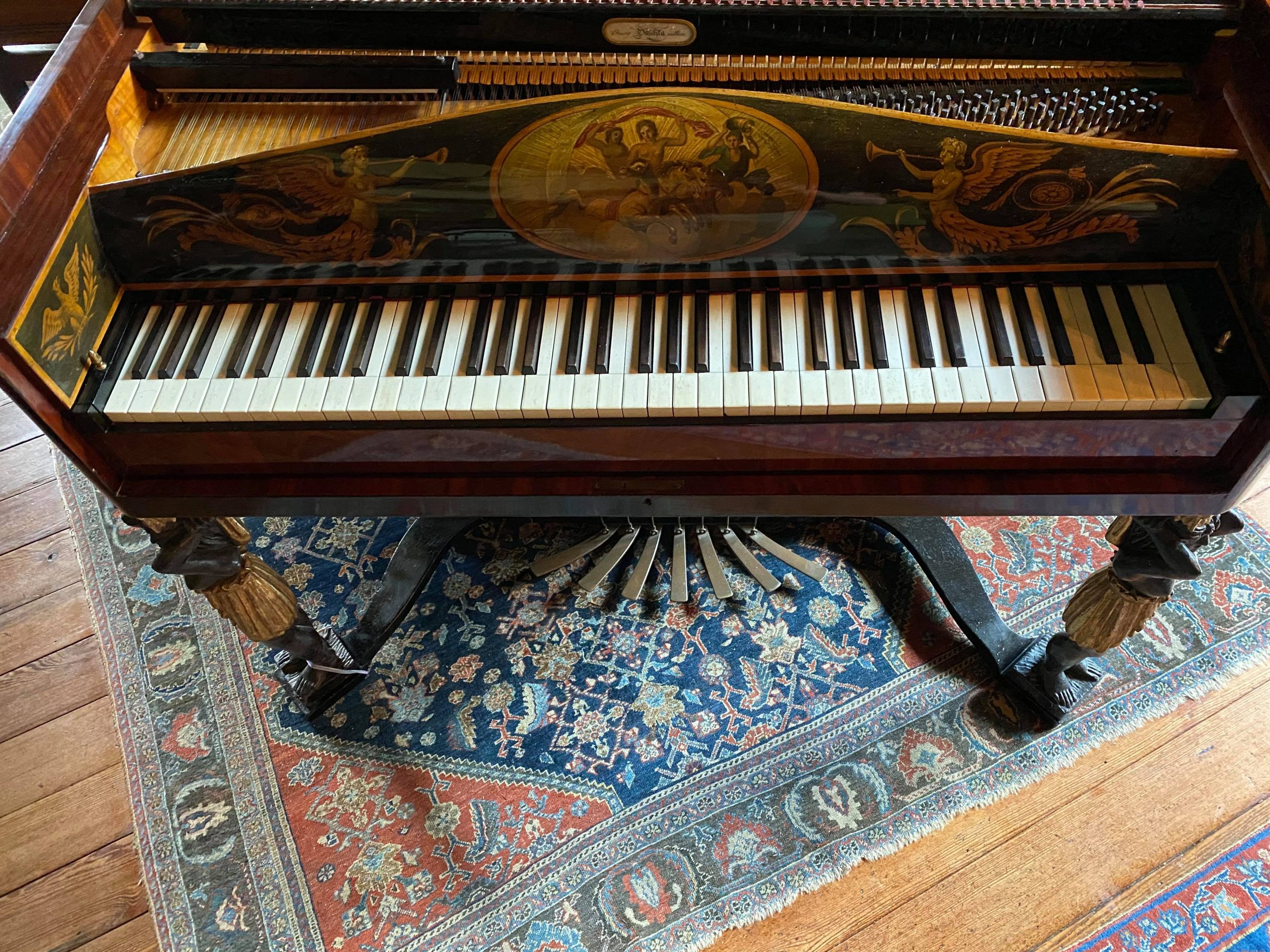 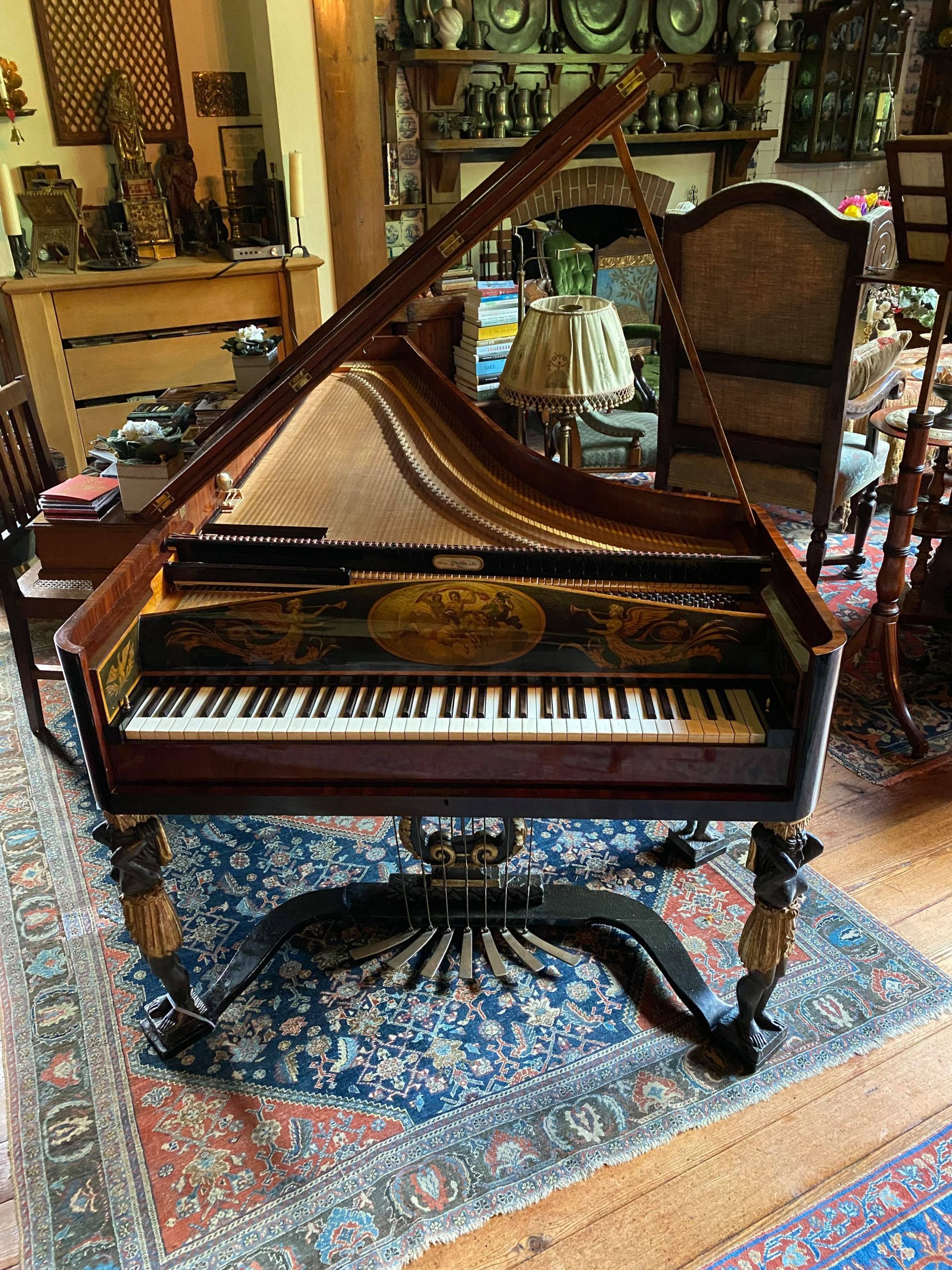 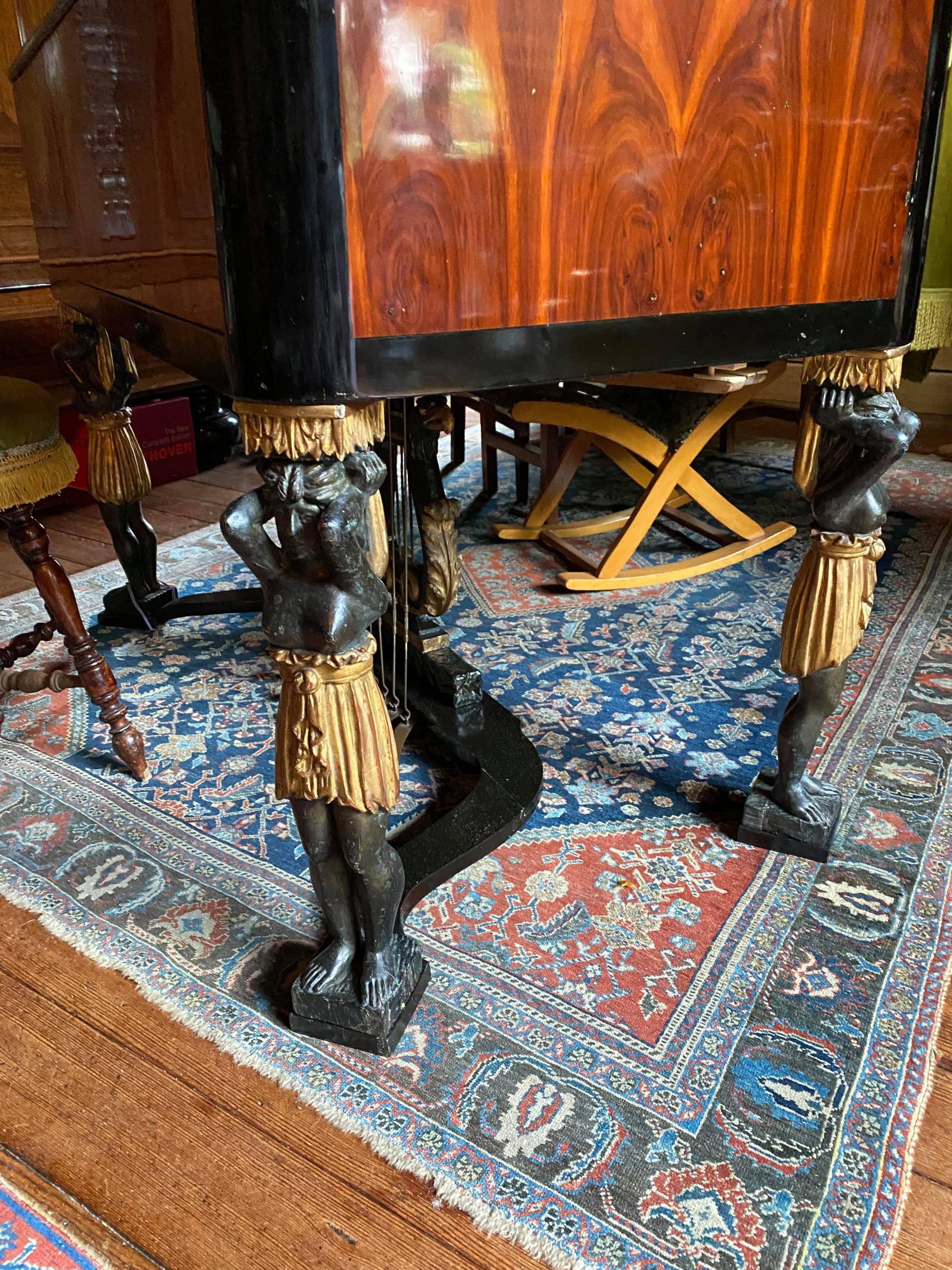 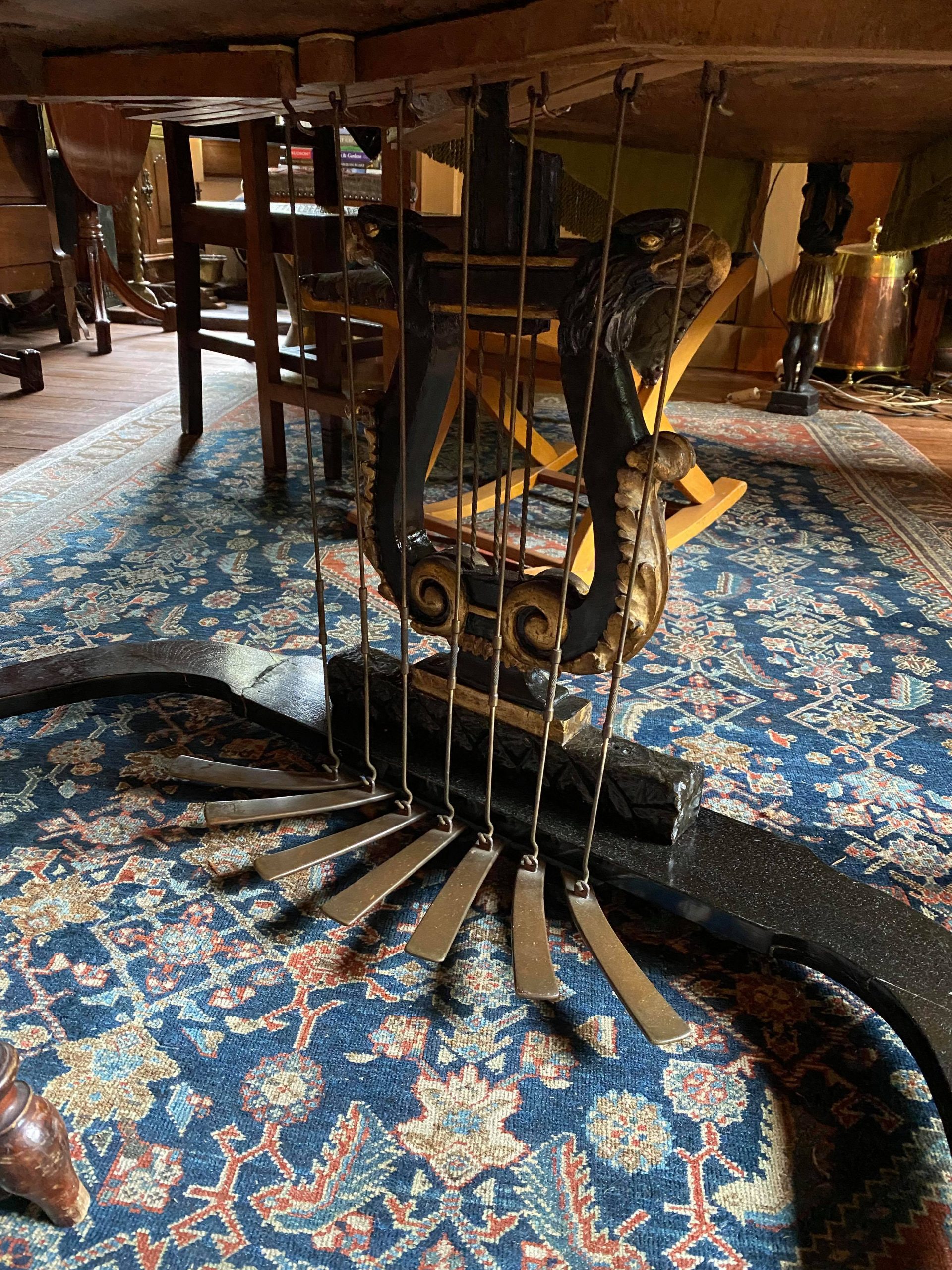 Context: At the time that this piano was built, continental Europe was in an economic crisis. Although this is a very luxurious fortepiano, the keys are laid with bone instead of ivory. The case is made from laburnum which is ebonized where needed. The supply of mahogany and ivory from outside Europe had come to a near full stop due to war.

Decorative features: The instrument is raised on four carved caryatid legs. Interestingly, these are depictions of African women as was usual to depict the African continent. The painted and lacquered convex nameboard depicts the story of Phaethon's fall in Ovid's Metamorphoses. Phaethon, the son of the Sun-God Phoebus, is allowed by his father to drive the chariot of the sun. When the day came, the fierce horses that drew the chariot felt that it was empty because of the lack of the sun-god's weight and went out of control. Terrified, Phaethon dropped the reins. The horses veered from their course, scorching the earth, burning the vegetation, bringing the blood of the Ethiopians to the surface of their skin and so turning it black, changing much of Africa into a desert, drying up rivers and lakes, and shrinking the sea. Earth cried out to Jupiter who was forced to intervene by striking Phaethon with a lightning bolt. Like a falling star, Phaethon plunged blazing into the river Eridanos. The epitaph on his tomb was: "Here Phaethon lies who in the sun-god's chariot fared. And though greatly he failed, more greatly he dared." The fall of Pheathon on this fortepiano hints to the fall of Napoleon due to the Napoleonic French eagles depicted on both sides of the keyboard. In 1812 Napoleon, who by that time dominated most of continental Europe, failed in his attempt to conquer Russia with great losses and thus his downfall had begun.